Apple cider vinegar is all the rage right now. It is has a long list of health benefits, but it actually reacts differently when consumed internally vs. applied externally on the body.

Contrary to what you may think, apple cider vinegar is actually not acid once consumed. Instead, it has an alkaline effect on the body when taken internally. Keeping your body’s pH levels, or the balance between acidic and alkaline, as stable as possible is said to aid in disease prevention. When your pH is too acidic it can present a favorable environment for disease. Research in the British Journal of Radiology demonstrated that cancer cell death was more likely to occur in an alkaline environment.

Foods such as meat, sugar and processed foods are very acidic to the body, and can throw that ever-so-sensitive pH out of whack. Consuming alkaline forming foods, such as ACV, can help in preventing certain diseases that can occur when your pH is out of balance.

Did you know that body odor isn’t caused by sweat? It’s actually the bacteria under your arms that cause the stench. So, technically, if you eliminate the bacteria you can help to naturally eliminate odor! 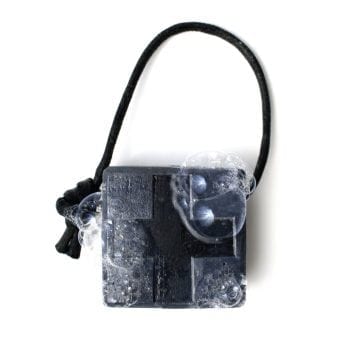 Formulated with apple cider vinegar, our shower bar can help control the bacteria under your arms for double the protection against stinky pits! Use it in the shower before you apply the takesumi detox charcoal deodorant. Click to shop now!